1. Eat half a banana that was abandoned on the floor.

2. Realize you haven’t had a shower in two days and then decide that you’re probably okay waiting another day.

3. Post a picture of poop on the Internet for verification of health or illness.

4. Make a serious plan to have the neighbor’s dog abducted after sudden, loud barking woke 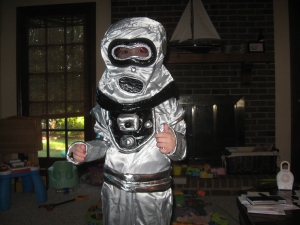 up your baby or toddler at the beginning of a nap.

5. Enthusiastically approve your child’s request to wear a costume to the mall if that means he will be pleasant and agreeable to all of your requests for several hours.

6. Clean up vomit that has just arrived on the dinner table, followed by finishing the interrupted meal as if nothing more than a glass of water has been spilled.

7. Notice someone has wiped their hands and nose on your shirt but feeling like it’s still good enough to wear for the rest of the day.

8. Keep the car endlessly stocked with a never-ending supply of goldfish or similar mouth-filling snack.

9. Hand your thirsty child a juice box that you think was opened yesterday but could have been opened three days ago.

10. Look at another parent in public struggling with his or her highly emotional child, and instead of judging, thinking, “Hang in there! We’re all on the same team, and being in public with your kid is about survival!”